This morning we looked out the window and saw snow flurries. Quite a departure from last week, huh? I know, I know, April weather is unpredictable across the board, and in Chicago it can mean tornadoes, hail, snow, or 75 degree weather. Ah well. That’s why we don’t plant the plants outside ’till May, right?

Last week, we had a good time discovering some of the perennials at the new place. Here are some of the unexpected treasures we found around the yard:

Pussy willows – a big hit with the kid. 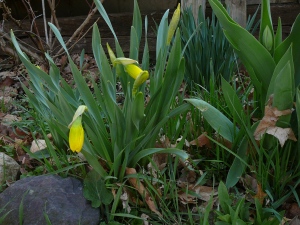 There are a few bulbs that are still blooming after who knows how many years!

The greatest treasure of all, though, is the fat woodchuck who has been burrowing in the basement since it came out of hibernation last week. Apparently, they climb trees in order to “survey their surroundings”. This one looks pretty satisfied, I must say. Hope it likes to travel, because this week it’ll be relocating to the woods behind the pond. 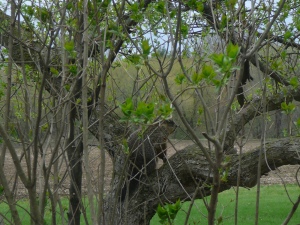 Woodchucks are also called “whistle pigs” due to the whistling sound they make when alarmed. And, I guess, their plumpness?